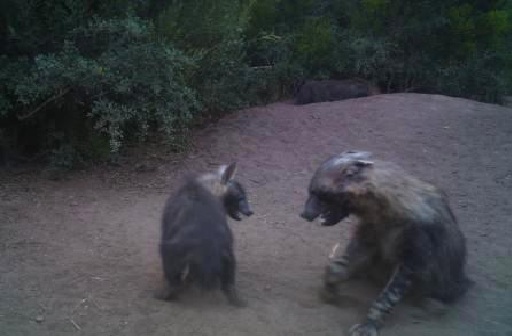 After recharging our camera traps we set off to plant one of them at the hyena den site. I was a bit sceptical as the previous attempt did not deliver any photos of brown hyena. In fact, when I last visited the den, there wasn’t any fresh activity around it and I was worried the hyena had left the area.

This could have been due to us setting up the camera or our general activity around the den area. I also wanted to make sure I extended the height of the camera this time because on a previous occasion, a hyena chewed the camera.

We set of towards the den, my eyes scanning the ground for any fresh signs that may indicate the hyenas were still in the area. As we walked closer I started seeing fresh dung and fresh hyena anal pasting’s on grass stalks around the area. This was a good sign and we quickly set the camera trap and moved off trying not to make too much noise. We did notice some small footprints around the den and I was convinced that there were some youngsters at the den. The plan was to come and fetch the camera after about two weeks. 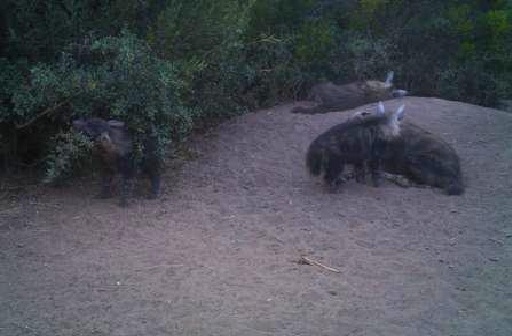 On Monday morning we went to do some bush clearing and decided to go and fetch the trap while in the area. I retrieved the camera and was very excited to download the images it captured. To our surprise, we did not just get a couple of photos, but well over 600 fairly good images.

We also got images of youngsters and adults interacting around the den! There are three babies we can now ID. These new additions are a good sign for hyena conservation and for our project as a whole, as we can expect more regular activity around the den which willl be great for collecting bone samples and IDing the adults over the next few months.

This find was really great after the earlier disappointments. I was relieved that they didn’t move away from the den and that some of the images even showed them to be quite relaxed in close proximity to the camera.