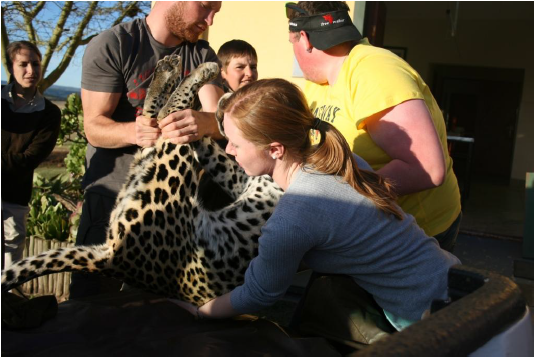 As you might know we track some of our animal movements by the use of telemetry at Shamwari. We use two types of telemetry tracking, one with a collar and the other is an internal transmitter. It is especially important when it comes to knowing whether a game reserve’s leopards are still inside the reserve and not on the neighbouring farmer’s land. Leopards are very hard to keep in and often escape even through electrified fences. It this leopard for instance became a problem animal by catching the farmer’s sheep, it might get shot. Therefore telemetry tracking is not only important for research (tracking of movements, animal interactions and to determine territory sizes) but also for keeping a healthy reserve/farmer relationship.

The lifespan for the tracking device battery is roughly 18 months and thus has to be replaced when the signal starts to get faint. This is what happened to one of our female leopard’s internal transmitters.

The Shamwari Conservation Experience volunteers went onto the reserve in the beginning of August in search of this female leopard. It was not long before we found her in a riverbed and we notified our Shamwari Veterinarian (Johan) and Ecologist (John) immediately. She was very relaxed and we got a good look at her before Johan and John arrived. She was also clearly on heat, making rasping purrs and rubbing her face in the bushes next to the vehicle. 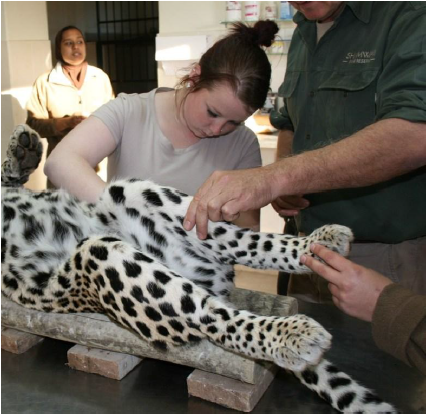 The vet arrived, she was darted successfully and the volunteers loaded her on the transport mattress, accompanying her on the way to the Shamwari Animal Hospital. Once there she was offloaded, Johan explained the procedure and we all got to watch him at work. After the short operation she was put in an overnight enclosure and we released her early the next morning. She was so happy to get out that when John opened the crate she flew out so fast that none of us could even get a picture of the release. We went back the next day to track her with the telemetry and found her far from the where we had dropped her off. She was with a big male leopard. We managed to get a good look before the honeymoon couple disappeared into the thicket. The stitches looked good and intact. We continued to check up on her for the next few days to make sure her stitches didn’t open up and get infected.

It is easier to do similar operations on domestic or zoo animals as you can keep them at the hospital for a few days to check on the stitches every day. It is too stressful on wild cats though so when you do the job you have to make sure you do it well and monitor them for the first few days back in the wild. Read more about about veterinary work experience.