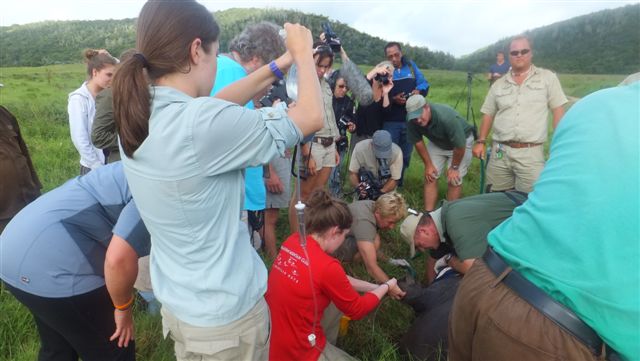 This month we received a visit from a third year Rhodes University student, Leigh, who is doing a scientific research project for her Bachelor of Science degree. She is analyzing dung samples of Eland and Impala, which are mixed feeders, at different times of the year to compare any seasonal variation. For a few days we had fun locating and observing the herds, before swooping down to obtain fresh samples after they had left the area. We did this on three of our adjoining properties, Kariega East, Kariega West and Harvestvale, which all have slightly different vegetation types owing to their respective historical land uses. The volunteers became experts at telling one species dung from another, and would be able to track an impala anywhere now.

Another exciting activity that happened during the month of April for Kariega Game Reserve volunteers, were three great days of game capture. Game capture normally takes place in autumn due to the cooler temperatures, so that the animals do not become heat stressed. It also has added benefits such as their offspring are usually weaned off of their mother’s milk by then, and the females are not heavily pregnant at this time of the year. The purpose of this year’s game capture was to reduce the number of males on Kariega East. Kariega East is a portion of the reserve that does not have any large introduced predators on it. Therefore management has to play an active role in reducing the number of animals in this section of the reserve, and maintaining a balanced male to female sex ratio. The males were sold to another reserve and the money will be used to re-populate Kariega West, or the section that does have predators on it. We helped capture and load waterbuck, kudu, wildebeest, blesbuck and zebra. Some of the animals were darted out of a helicopter and on these occasions the volunteers assisted the ground crew with tracking the darted animal using telemetry and loading it into the truck. However the majority of the animals were darted off of the Kariega Volunteer vehicle, from which the volunteers got a front seat to all the action. You don’t get more hands-on involved than this!

Of course it would be amiss not to mention our most recent treatments of Thandi the rhino. I am sure most of you have been following her amazing story on the Kariega Game Reserve facebook page, but for those of you who haven’t heard of her yet, let me give you a quick update. Thandi is our only surviving rhino from a poaching attack on Kariega Game Reserve on the 3 March that left two male rhinos dead. We have been continuously treating her wounded face with the help of wildlife veterinarian, William Fowlds, and a dedicated team of Kariega staff and volunteers. Our conservation volunteers involvement have varied from week to week, with more responsibility being handed to them as they gained experience and trust with each successful treatment. During the last treatment, the volunteers were asked to assist with injecting Thandi with antibiotics, anti-inflammatories and multivitamins. Injecting a rhino, with skin 2cm thick in places, is much harder than it looks and one can go through quite a few bent needles if you aren’t careful! Hopefully the medicine that we are giving her will boost her immune system in fighting off infection and provide her body with the strength it needs to heal her wounds. Already the holes where her sinuses were are sealing and her facial wounds are looking better and better with each treatment. Thanks to all our dedicated conservation volunteers on Kariega who have helped her along this remarkable recovery!

Kariega conservation work volunteers also did some manual tasks this month such as removing old poles from places where farm fences used to exist many years ago. Most of these old poles are made out of sneezewood, an extremely hard and durable wood, and were put in to stand the test of time. Removing old fence lines is a tough and timely job, but it not only improves the scenic beauty of the landscape, these weathered old poles can also be recycled around the lodge for building and decoration purposes. We also spent some time ‘renovating” our campsite next to the river, which included cutting grass, clearing bush, making tables and erecting poles to secure our bivvie tents and protect us from the heavy winter dew. Afterwards we tested our improvements by spending a weekend by the river, canoeing, fishing and braaing marshmellows.

Although there is a noticeable winter chill creeping into the night air, we still had great sunny days during April. The volunteer programme team took full advantage of these by hiking through the bush and admiring all the tracks and signs left behind by the animals. Despite the killer mountain climb out of Harvestvale, that made more than a fair share of Kariega volunteers proclaim “I thought I was going to die!”, everyone enjoy it immensely. After a lovely picnic out in the bush, the volunteers spent the entire day hiking around the property. We justified this pleasant activity by doing some productive work and changing all the leopard trap camera batteries and memory cards while we were there. On our hikes we also encountered some amazing views and a few new lookout points on top of cliff faces that will be perfect for sundowners in the future!

I am off now for a short well-deserved holiday, but will be back refreshed and excited for a new chapter of working on the marvelous Kariega Game Reserve. I hear that there will be lots of volunteers to keep me busy when I get back, and I look forward to meeting you all.
Safe travels,
Justine