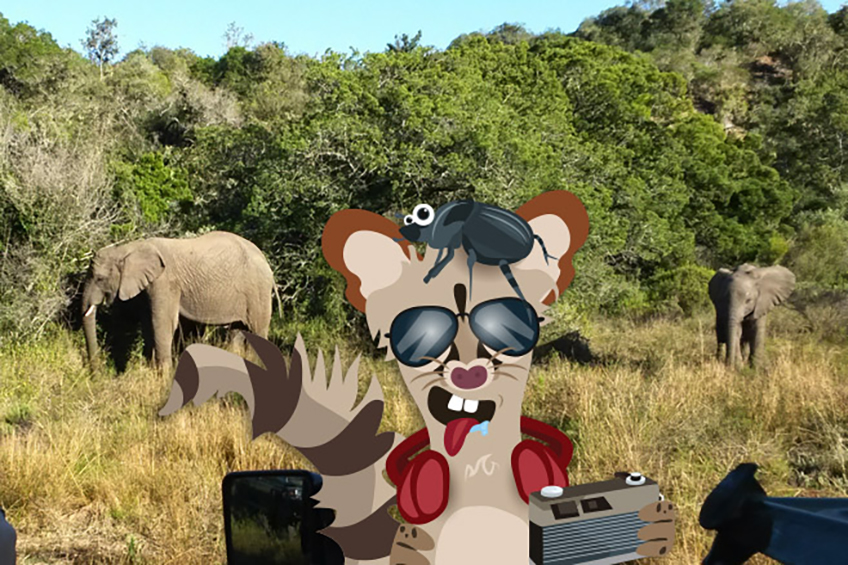 After enjoying the plane ride and in-flight entertainment of Alice Through the Looking Glass, the real adventure begins. I’m now here in Africa. Doug greeted me at the airport – and he’s everything I thought he would be. Small, smiley and a little chubby – sort of like a hamster. But without the fur.

Remember me saying that he was a pretty cheeky character? Well, he never failed to live up to my expectations. A cheeky Nando’s was our first stop before we went back to his dung hut – extended especially for my stay. Charming really!

I could tell this wasn’t Doug’s typical meal. I wasn’t aware beetles could sweat and go a shade of red I’ve only seen my mother turn when I used to leave my bedroom light on. It was all slightly alarming – and what made matters worse was that he only had medium spice. I went for my usual two whole chickens, extra spicy, with sides of chips, rice, garlic bread and halloumi cheese. Tasty with a capital ‘T’.

Next up was meeting Doug’s family; his mother Dorothy, his father Dorian and smaller brother Dustin. They were very hospitable and made me feel right at home, even if I was a little too large for their dung hut. I couldn’t help but feel relieved that I had packed my waist trainer, as getting in and out of some of the doorways was quite precarious at times. Unfortunately I still don’t feel as if I made the best first impression, as I did take off a few chunks of the roof with my forehead, and nearly squashed Dustin. I soon made my way to bed though, so as not to cause anymore disruption and get a good night’s sleep in preparation for our travels.

We set off around 6am the next day into the Eastern Cape, armed with our travelling supplies and some bagels and bottled water, kindly provided by Dorothy. In the distance I soon spotted what looked like a small hill, but as we got closer I realised it was an elephant in some discomfort. Just as I got closer to the poor thing, I was rudely interrupted by a bunch of humans on a jeep, so scurried off to join Doug in the overgrowth to observe what was about to unfold.

At home I was of course aware of vets who would treat tabby cats and Labradors, but I had never seen such talented people bring this great creature back to its best so quickly. I was thinking of my local vet and what he would give to be working with elephants, lions and rhinos instead of that yappy mongrel from two doors down!

I was truly amazed at their ability – and how close they got to the elephant, however unfortunately whilst I watched the majestic creature find its feet once more, Doug thought it would be a good idea to scuttle off into a distant parade of elephants. As soon as I realised I ran as fast as I possibly could, as Doug may have the best of intentions, but is a few sandwiches short of a picnic, if you catch my drift. It had evidently slipped his mind that elephants may in fact struggle to see a beetle… and just as I arrived near the parade… all of a sudden I witnessed the unthinkable; an elephant’s foot slamming down on Doug. Great, our first day of travelling and Doug is dead.

I should have stayed at home with the gin I thought to myself. However, as quickly as it happened, the elephant once again moved its foot – and all of a sudden, out pops Doug, entirely unharmed! After nearly giving me a heart attack, (not forgetting I was quite vulnerable after running so quickly) he informed me that dung beetles were the world’s strongest insects, so it would take more than a little stamp to kill him. Diving head first into some elephant faeces, he then preceded to inform me “life ain’t no fun, if you ain’t got no dung”. So, one thing is certain, we’re either going to have the adventure of a lifetime, or Doug is going to be the death of me.