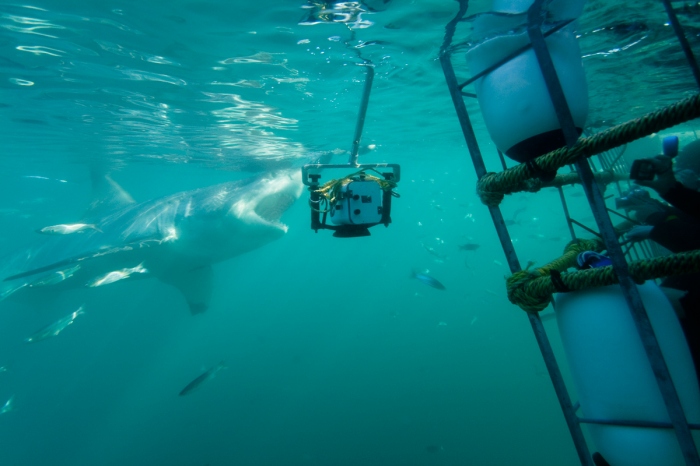 Whilst South Africa is typically known for its vast array of land-based wildlife, you can find just as much spectacular beauty in its sweeping oceans. We’ve listed our top five favourite animals that you can expect to see in the South African waters below – and if you fancy the chance to see them whilst working alongside expert researchers and conservationists, don’t forget to check out our amazing marine projects after!

Southern right whale
With a length of 15 metres and a weight of up to 47 tonnes (around four double decker buses!), this is the largest animal you’ll find in South Africa. Southern right whales are the most active breed of their species, and tend to interact more with humans than their counterparts – they’re even known to interact with dolphins! If you’re keen on doing a bit of whale watching, we’d recommend heading over to South Africa between June and October.

Interesting fact: Southern right whales have an enormous head, which is up to one quarter of their total body length!

African penguin
African penguins are commonly found just off Port Elizabeth and are the only penguin species that breed in Africa. Their diet mostly consists of smaller fish and squid, and they’re aided in their pursuit of these delicacies by their ability to dive up to 130 metres and hold their breath for an average of 150 seconds – not to mention their swimming speed of up to 20 kilometres per hour! Sadly, it isn’t all good news for the African penguins; they’re a popular dietary requirement for many animals in both the sea and on land, including mongooses, whales and sharks. Predation pressure is also one of the reasons that the number of African penguins has fallen by more than 60% since the 1980s – together with oil pollution and the commercial fishing industry.

Great white shark
One of the most misunderstood animals in the world, the great white shark is not the savage man-eater that Spielberg presented in Jaws – you’re actually more likely to be killed by a vending machine! Great white sharks are known to hunt individually, and it is hunting that has brought scientists some of the more enjoyable moments in their studies of great whites. Breaching in particular is a fascinating hunting technique, where the shark approaches the surface at a high speed to get its prey. This often takes the shark completely out of water, creating a rather incredible spectacle – one that is regularly seen on Seal Island, False Bay.

If you’re interested in volunteering with great whites and preventing the needless slaughter of over 100 million sharks annually, please click here. 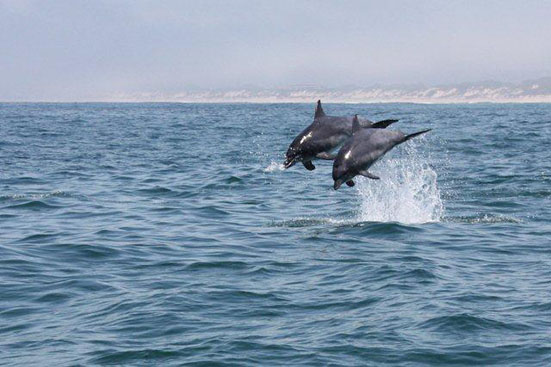 Bottlenose dolphin
Dolphins are known for their high level of intelligence and human interaction – and the bottlenose, one of the most well known dolphin species, is of course no exception. Their incredible communication skills consists of sounds, whistles and a wide array of body language – with many studies showing they’re arguably the most intelligent mammal on the planet behind humans. Like other dolphins, bottlenoses use high frequency echolocation to locate and capture prey – they also use many different feeding strategies, including ‘fish whacking’, where they use their flukes to strike a fish and knock it out of the water.

Top tip: If you’re keen to see the bottlenose dolphin in South Africa, Plettenberg Bay is the hot spot.

Brown fur seal
Often found loitering around Port Elizabeth, the brown fur seal (also known as the Cape fur seal) is the largest of the fur seal species, with males growing up to 7.5 feet in length and weighing up to 300kg! These seals in particular can be very playful in the water, especially with scuba divers – much like their counterparts, they are also much more graceful in water, in comparison to their somewhat clumsy behaviour on land! The brown fur seal’s diet mainly consists of fish and squid, however they are known to attack sharks for the rich contents of their stomachs and livers, which are a powerful source of energy – however we must stress this is rare!

If you’re keen to learn more about African conservation beyond the plains, make sure you take a look at our marine projects, which give you the chance to work with leading researchers to protect the lives of amazing creatures such as sharks and dolphins. There are also plenty of opportunities for diving, both in the coast and local river systems, not to mention cage diving with great white sharks!