Ensuring a Future for Black-Footed Cat at HESC 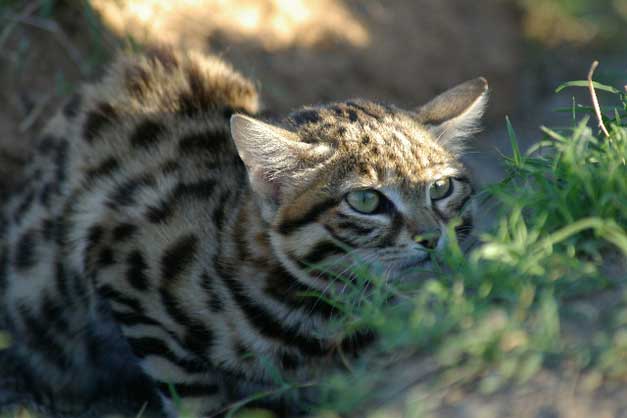 HESC is working together with the Cat Conservation Trust in South Africa and Ree Park in Denmark to ensure a future for the endangered Black-footed cat.

Dale and Dagmar will be moving from the Cat Conservation Trust to HESC in the next couple of weeks. It is hoped that once they’ve settled into their new digs they will mate with HESC’s cats, who are a perfect age match for the pair. Eventually Dale and Dagmar will move to Ree Park, where they will become part of the European Black-footed cat breeding programme. HESC built four new enclosures in anticipation of the project, which is set to kick off when the cats arrive as soon as their travel arrangements have been finalised. According to Marion Holmes at the Cat Conservation Trust, Dale and Dagmar both have lovely personalities and are anything but shy. She says they love following the dogs around when they come into the enclosure with her. Dagmar has not had a kitten yet this season, so Marion placed her with an unrelated male during the second half of March. This could well mean that she’ll arrive at HESC already pregnant. Dale is currently with a new female that came from the Kalahari. He was so excited when she was finally released from quarantine, and immediately made it clear to Marion that he wanted the interleading door open. Anja has not had a litter before, so let’s hope she accepts him. It would be nice to know that she is expecting before he leaves. For now we’ll just wait patiently for their imminent arrival.