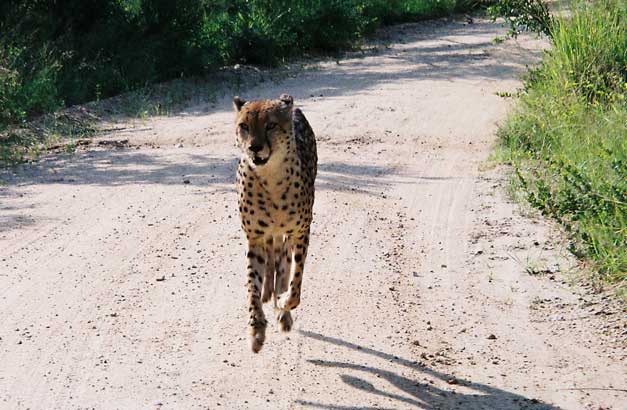 One of the best feelings in the world is to open a cage trap door and watch as one of our cheetah runs free. Unfortunately they are sometimes faced with unforeseen challenges as they adjust to life in the wild, although if this does happen HESC is never far away.

In March we released two cheetahs onto the Kapama Game Reserve, and they both ended up needing a helping hand. Habana was the first to return to the Centre after he broke his ankle. We’re not sure what happened, but we think he probably hurt himself while hunting. When a cheetah is focused on its prey it often fails to notice things like rocks and shrubs. We’re pleased to say that Habana is doing well, and his ankle is almost completely healed. Khula (the hand-reared cheetah that we released alongside Habana) proved to be an astute hunter. He even caught a kudu calf soon after being released to the wild.

Unfortunately the risk with hand-rearing a wild animal is that it may end up preferring human company, which is exactly what happened with Khula. After his release he started approaching guests while they were out on bush walks in order to satiate his craving for human company. Being approached by a cheetah – when there is no fence separating you from it – is disconcerting to say the least. Even though Khula is used to people, he is still a wild animal (although he’d probably disagree) and therefore quite capable of hurting someone if caught off-guard. We obviously didn’t want to run the risk of this happening, so we brought him back to the Centre where he spends his days lapping up all the attention he gets from visitors.

We often take Khula to the airstrip to stretch his legs, because as much as he enjoys hanging out with us he still has the need to run long distances. When we realised how enjoyable it was for him (and us!), we decided to make this exciting and unique experience available to the public.

We let Khula out of his enclosure at 4pm everyday. The eager cat then follows Christo’s truck onto the airstrip, and that’s when the fun begins. Khula is free to do as he pleases, so there’s no telling what the fleet-footed feline will get up to.

Once Khula has finished running and harassing the Blue wildebeest and warthogs that frequent the area, guests are given the opportunity to interact with him and have their photo taken with him.

Last week we were all thoroughly entertained when our wannabe hunter began stalking a herd of Blue wildebeest. He chased them around the bush for a while, and then much to our amazement the wildebeest actually ran towards Khula in a bid to chase him away!

This turned out to be some clever thinking on their part, because our smart cheetah took note of their behavior and moved off to the safety of a dense bush.