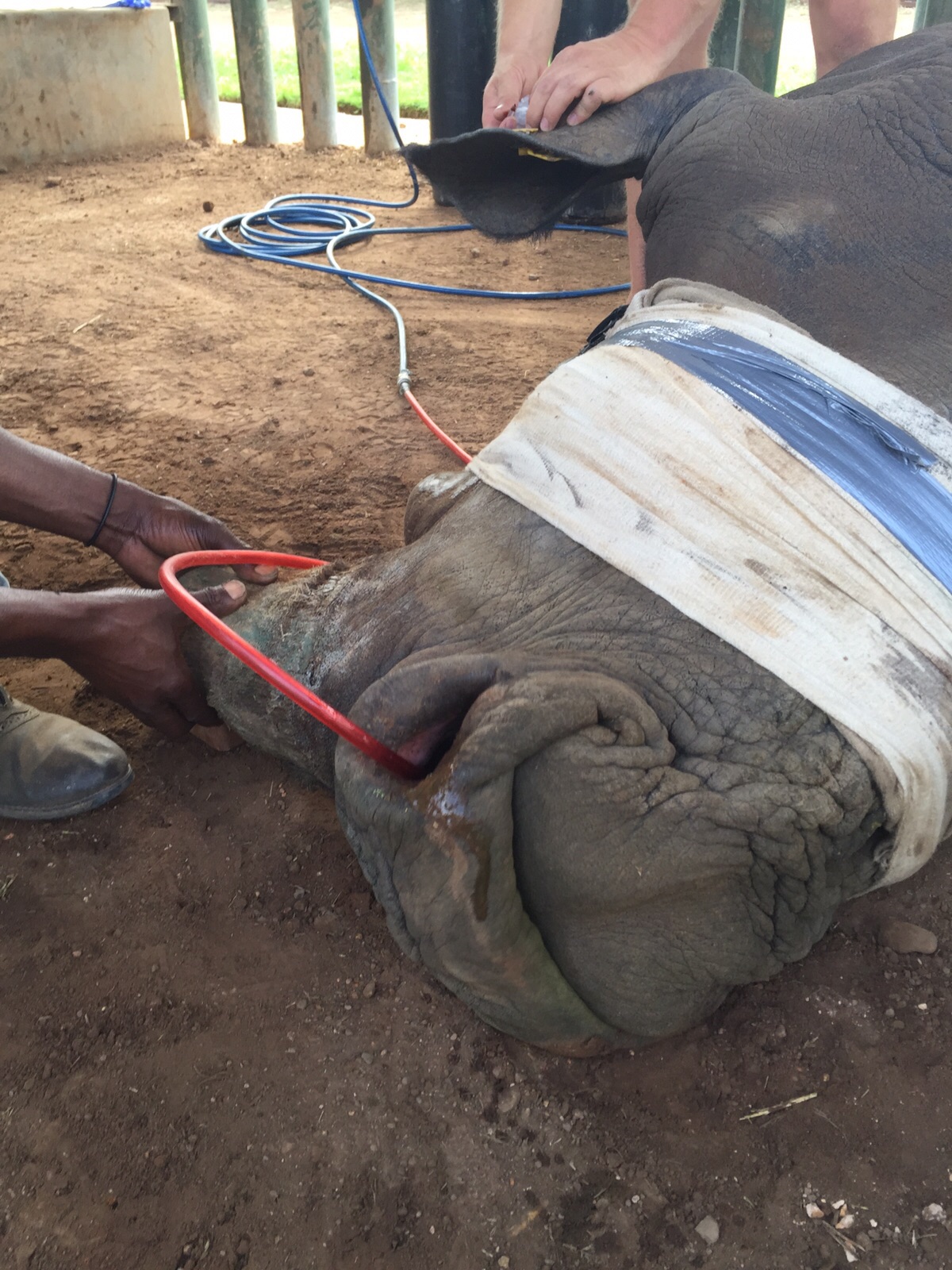 Totsiens Suid-afrika! That’s ‘good-bye South Africa’ in Afrikaans. As I write this we are on our way back to Dr. Burger’s home from our last appointment as Global Vets volunteers. We just finished up with the elephant cow that we have been working on for the past 2 weeks. We are happy to report that she is doing better! Although she still has a difficult road to recovery ahead of her. Speaking of roads, we are currently enjoying our last scenic sun-set drive. We normally start our day driving as the sun rises and end it driving as the sun sets. South Africa is full of beautiful mountain views everywhere you look. We are really going to miss the Wildlife Veterinary Course!

To conclude the fantastic trend we’ve experienced, we had yet another amazing week, although this one is shorter because we are ending on Friday. We started the week treating and moving 9 buffalo, which took up almost all of Monday. After darting the buffalo, Vivek and I were responsible for all injections, including reversal of the animals when all work was complete. To move the buffalo, each one had to be placed on a mat that would the be raised onto a pick up truck that has a crane attached to it. Vivek and I would have to ride in the back of the pick up with the animal (something we have done a lot of this week!) to ensure the respiration rate never dropped below 12 breaths per minute. Aside from a minor disagreement between 2 of the relocated bulls, everything went smoothly and we had done all 9 animals just before sunset. Normally we would end the day at or before sunset, but concern for the elephant cow with Herpes virus was growing, and an emergency visit was required. It was dark by the time we reached her, and Dr. Burger was concerned about working on her so late, especially because it takes time for the sedatives to take effect for us to be able to do anything. After hearing  Dr. Burger’s concerns, Vivek came up with the brilliant idea to use local sedation on the elephant’s hind limbs, the area of most concern for Dr. Burger. The local sedation worked perfectly, and we were done the treatment within 30 minutes, allowing us time to get home for dinner, and the cow time to relax for the evening.

On Tuesday we had to go to an appointment in the Eastern Cape province, which was about a 5 hr drive from where we were in the Western Cape. The clients there also needed some animals treated and moved, similar to our appointment on Monday, but different animals. Waiting for us upon our arrival was a few pick up trucks to help with the work and a helicopter. Since we would be working over a couple hundred hectares, and on a mountain range, Dr. Burger had the exciting task of darting the animals from a helicopter, at which point the helicopter would hover over the sedated animal and we would rush over in a pick-up truck. Vivek and I were responsible for the ground work, which involved treatments, helping to move the animals, and reversal. By the end of the day, we had worked on 2 Lechwe and 2 Kudus. We had also planned to work on some Elands but nobody was able to spot them from the helicopter. We spent the night at the farm on Tuesday night and continued our work with the same clients on another part of their property on Wednesday. Since the other spot was a bit further to get to, the helicopter pilot helped us save some time by doing a couple trips to fly us all over (an exciting first helicopter ride for both myself and Vivek!). We spent most of Wednesday taking care of the ground work while Dr. Burger spent his time in the air finding and darting the animals that needed to be treated. After working on 10 Wildebeest we ended the day with 1 pregnant Blesbok and then drove back to the Western Cape in the dark.

Dr. Burger had scheduled another appointment for some helicopter work on Thursday, but there were some problems with the pilot so we had to reschedule our plans for the day. Dr. Burger took us out in the afternoon to see his taxidermy facility. While there, I helped Dr. Burger perform a post-mortem on a dead bontebok and we found some interesting lung lesions. The bontebok are an endangered species, so it’s important for the farmer to identify any problems quickly. Dr. Burger is suspecting lung worm in that animal, but we took some biopsies and lymph nodes so we are still waiting to hear about those!

Friday was our last day working with Dr. Burger. We started the day doing the helicopter work we had planned for Thursday with some Bontebok. Once again Vivek and I were responsible for the ground work while Dr. Burger darted from the helicopter. We also had to transport the animals, which meant that Vivek, Suzahn (Dr. Burger’s assistant) and I had to stay with the animals in the back of a truck, keeping them upright and checking their breathing, keeping our butorphanol prepared should one of them stop breathing. Since the Bontebok are a protected species and are on the CITES list (Convention on International Trade in Endangered Species of Wild Fauna and Flora) we were accompanied by government officials who were responsible for ensuring that we followed regulations and for collecting the blood and hair samples that we took. They placed the samples in sealed forensic bags for transport to their laboratory to ensure that there would be no tampering with the samples. They also checked the placement of the microchip with their scanner after we microchipped the animals. We’re lucky Dr. Burger has entrusted us with so much responsibility in such a short amount of time! After completing the work at the first farm, the helicopter pilot offered to take Vivek and myself back to Mossel Bay area, where Suzahn and Dr. Burger would drive to meet us. We enjoyed the stunning views on another helicopter ride, this one being about half an hour. Approaching the ocean on a helicopter was pretty spectacular! We then went to visit the elephant, as I mentioned earlier. We noticed she was having some tetanic seizures, and after some investigative detective work to where she grazes, Dr. Burger noticed a plant called Cynanchum ellipticum in the area. That plant is very poisonous, and carries a serious neurotoxin so we immediately alerted the staff and told them to keep her away from those plants. It was a good thing we found it early enough! That concluded our work with Dr. Burger. We have had an amazing time here in South Africa, and have learned a ton about wildlife, veterinary medicine, field work, and so much more! I would not hesitate to recommend this Wildlife Veterinary course to anyone looking to pursue it as a career! Dr. Burger has been an amazing teacher and we hope to return to work with him again some day soon!