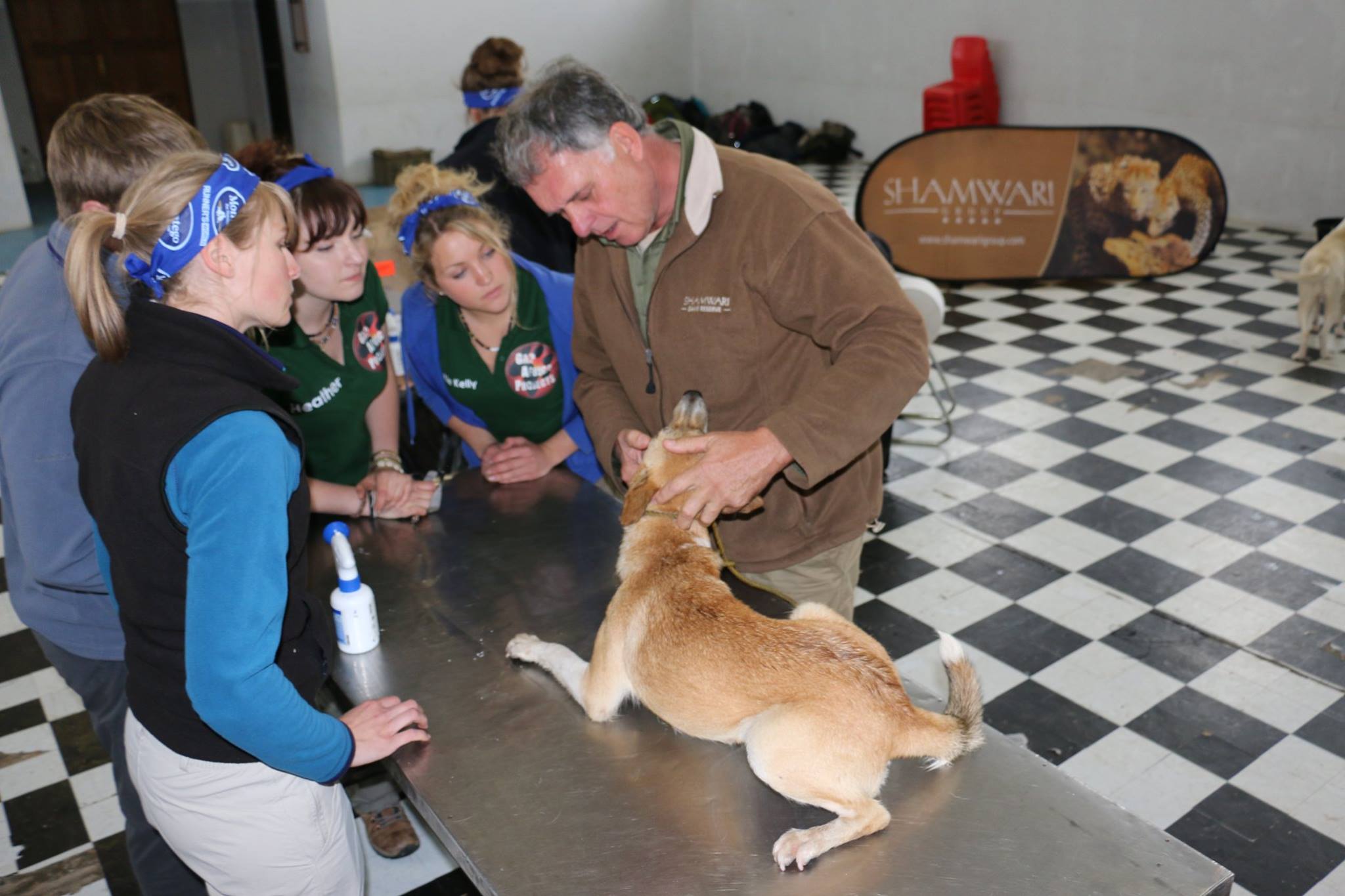 Jordan has just completed her two week Vet Eco Experience and the following is her account of her final week in Africa – make sure you keep an eye on our blog next week to find out what SGS College got up to at the Shamwari Conservation Experience!

After been involved in moving Jerry the lion between Born Free centres last week, we had a behind the scenes tour of the southern centre this morning. Although it was nice to see the animals close up with a much better lifestyle than those they had previously, the lasting effects of their upbringing prior to coming to Born Free were evident. In particular, a lion and lioness that had been fed inappropriately while being kept as pets were far smaller than their wild counterparts due to their juvenile malnourishment. The lioness also moved very awkwardly as a result of the effect on her bones. While it was heartbreaking to watch, we could only be relieved that they were now in a much better environment.

All of the cats at the centre have had associations with humans in their past through routes such as the pet or circus trade which ultimately makes them unsuitable candidates for re-release. However, the Born Free Foundation do the best they can for these animals and give them as normal a life as possible without living in the wild.

We spent the afternoon at Shamwari’s rehabilitation centre, learning the stories of the patients and giving their evening feeds. We again visited ‘Hope’ the rhino who had been victim to a poaching attack and discussed her treatment. 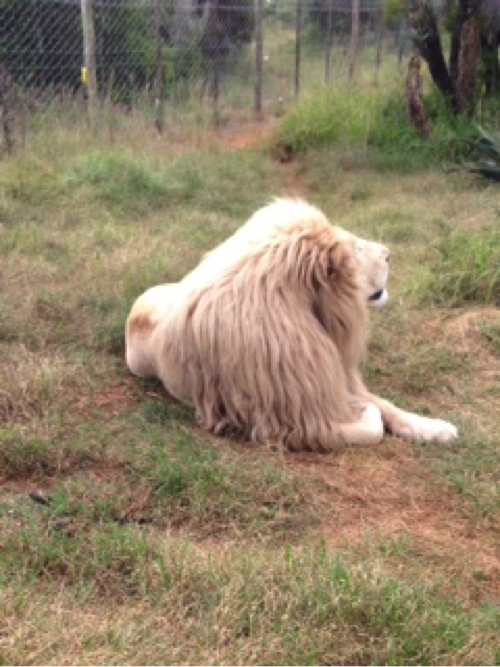 After our taste of helping in the community last week at the school, today we went into the same township to run a clinic for the local dogs. The aim was to provide basic health checks, vaccinations for common diseases in dogs including rabies and flea treatment. We were also prepared to euthanise any severely ill or unwanted dogs.

After a slow start, we were inundated with local dogs and quickly found a rhythm in order to systematically examine, inject and flea spray them. The language barrier and the unpredictable nature of the dogs presented quite a challenge, but we adapted with translation from the Shamwari staff, miming and makeshift muzzles.

Although prepared for the emotional strain, it was difficult when several puppies were brought in unwanted, and so had to be put to sleep. Unfortunately, in communities such as this, rehoming is not appropriate, as there is already a big population problem in the township. We had to accept the situation and get on with it as much as possible, as sad as it may be.

After a very busy morning, we felt contented that we’d helped the community. We had managed to treat over 130 dogs (and a few cats that had been brought along too). While emotional at times, it was extremely rewarding and we felt the day had been a success. I hope that Shamwari will continue to provide these clinics in the future. 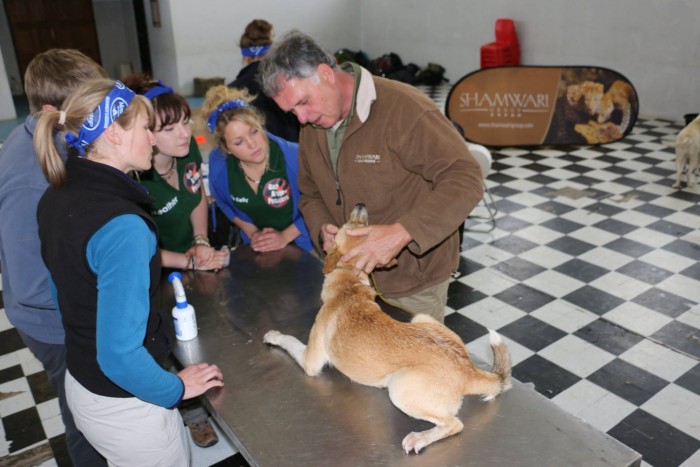 Understanding the ecological background of a reserve and the behaviour of the wild species is vital in order to apply the correct veterinary course of action. One of the ecologists from the reserve talked us through important ecological concepts this morning to help us grasp a better idea of their importance and relation to veterinary work.

Putting this into practice, we then saw to a sable bull that was darted in order to measure his horns to determine the value of his offspring. Once the quick task was completed, Kaitlyn and Sophie administered the antidote for the sedation, and we jumped back into the truck to monitor his recovery. This was followed by a talk given by Johan, the vet, on common diseases seen in wildlife and how they are (or in some cases can’t be) managed on a reserve.

Our afternoon was spent handling snakes that had been brought in by a local expert, who gave us some great hints and tips on what to do if a reptile comes through the practice doors.

This evening, we drove around the reserve on night patrol, spotting animals by their eye reflections in our spotlights. We saw animals we’d seen during the day, plus a few nocturnal ones such as the spring hare and dwarf antelope.

The wildlife manager gave a talk this morning which summarised much of what we’d learned over the past couple of weeks. Wildlife management encompasses a whole spectrum of factors from fencing and road maintenance to maintaining a predator-prey balance. The right management makes a huge difference to wildlife veterinary, as was demonstrated by a couple of videos showing game capture gone wrong.

We then took a closer looks at some of the different types of boma (enclosure) used on the reserve for game capture, including one used for hippos, which we hadn’t seen in use. The differences between each type were highlighted, relating specifically for which animal they were designed to hold and, in some cases, the measures taken to ensure the wrong animals don’t wander in.

After a short break, we spent a long afternoon game drive continuing our search for Sandile, the infamous leopard who had evaded us so far. During the drive, we spotted many of the species we’d seen already but also came close to two cheetah who were enjoying the sun. With the help of the telemetry equipment, and one of the reserve’s ecologists, persistence paid off (around 9 hours across 3 attempts of tracking) and we  finally caught a glimpse of Sandile on the other side the valley. To our astonishment, she came through the thicket towards us and after adjusting our position, we managed to see her up close in all her beauty. It was a privilege to have finally seen the elusive cat on our last afternoon at Shamwari. 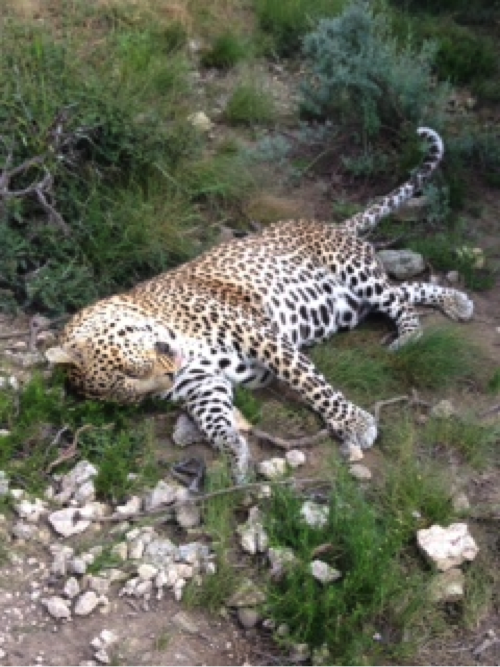 I think I speak for the entire group when I say that I’ve had a fantastic time at Shamwari. It’s been incredible to work so closely with such a variety of stunning animals, and the opportunities for practical work and gaining a greater understanding of wildlife veterinary and conservation have been excellent. Thanks to everyone at Shamwari and Gap Africa for such a wonderful experience.