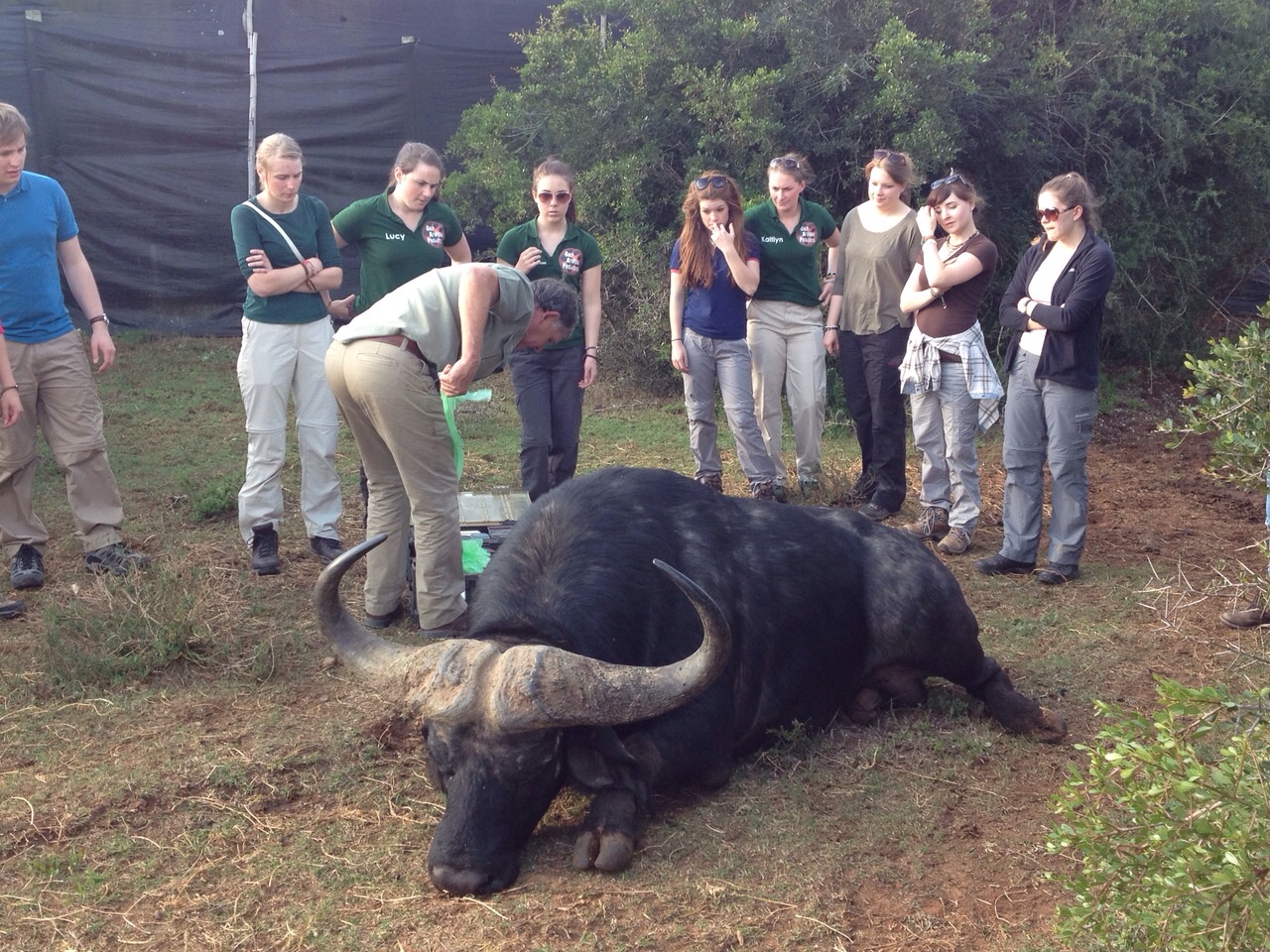 Jordan is currently on her two week Vet Eco Experience and the following is her account of her first week in Africa – make sure you keep an eye on our blog to find out how she gets on next week at the amazing Shamwari Conservation Experience!

9th June
We were warned that plans change fast, and so we were thrown in at the deep end on our first full day at Shamwari when a male lion needed relocating from the North Born Free Centre to the Southern one (Shamwari is home to both of these sites of the Born Free Foundation). Having had no wild animal pharmacology lectures at Shamwari by this time, we had a crash course in anaesthetic drugs used for big cats, by way of a brief discussion of the drugs that would be used for the procedure.

Before we knew it the lion was darted and having waited for the sedation to take effect, we were in the enclosure lifting the lion onto a stretcher and performing health checks. Everyone got involved whether it was lifting (which required all of us and then some), or part of the monitoring. Heather kept an eye on respiration rate, while Erin trimmed claws and checked for in-growing claws and Alison and Sophie measured the lion’s girth. I took blood samples for a health screen. We then lifted the stretcher into the transport box on the truck, where Megan then reversed the sedation.

We raced across the reserve to meet the lion at his new home, and watched the release into the enclosure, followed by the nearby lionesses tentatively nearing the enclosure to investigate the new addition that will join them in the next couple of days.

Our afternoon consisted of visiting a sable with a prosthetic leg. She had outgrown her current prosthesis and so we needed to measure her growth and make a cast to send off to the veterinary university in Johannesburg for them to produce a new, better fitting one. This also required darting the animal with sedation. After lifting her onto a table for the casting for which Lucy got her hands dirty, we realised she needed her claws clipping, which Hannah assisted with.

Overall, we had a pretty amazing first day, got up close to animals we’d never seen before and spotted loads of wildlife around the reserve while driving between activities. I think I can speak for the whole group when I say that we’ve all loved the first day and can’t wait to see what the next two weeks have in store. 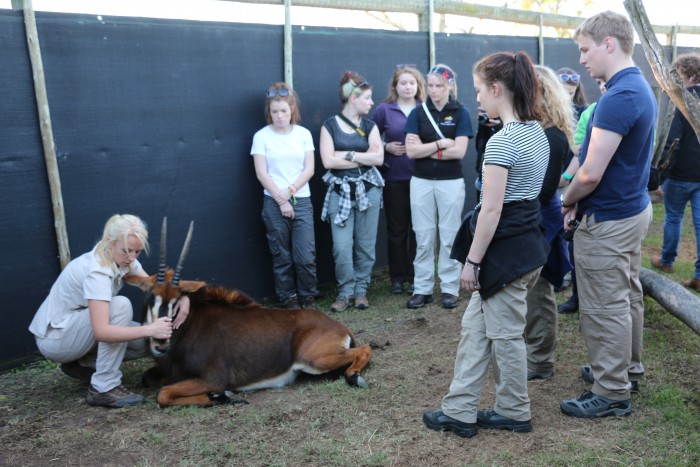 10th June
Today we witnessed how things can go wrong when working with wildlife in the field. While trying to capture a single zebra out on the reserve, it took three attempts before a suitable candidate was anaesthetised. This demonstrated that darting isn’t as easy as it may seem, and there’s lots of variables to get right. After waiting for the zebra to be fully sedated, we approached and together got her onto a stretcher. Doug had an injection to top up her sedation to allow us to get her into the truck. When she was safely in, Alison administered the reversal. Meanwhile, Sophie went to reverse the sedation of another zebra who was not sedated properly during the first dart attempt.

The truck departed to take the zebra to her new home, and we went to another part of the reserve to help move a buffalo who was in an enclosure for TB testing, but needed relocated to a bigger, more suitable one. Notoriously dangerous, we all had to act quickly and move precisely when instructed to ensure everyone’s safety around this guy.

Having been thrown in the deep end with regards to drugs over the last couple of days, the vet then gave a lecture on wildlife pharmacology, which helped us all to consolidate the points we’d picked up practically.

Our morning wrapped up with a zebra necropsy, during which we tried to apply our pathology knowledge on a slightly higher species than we’re used to at vet school!

The afternoon was a little more relaxed, involving watching lions on the reserve lazily attempting to hunt and monitoring white rhinos. We identified them by their ear notches and enjoyed watching them at peace. 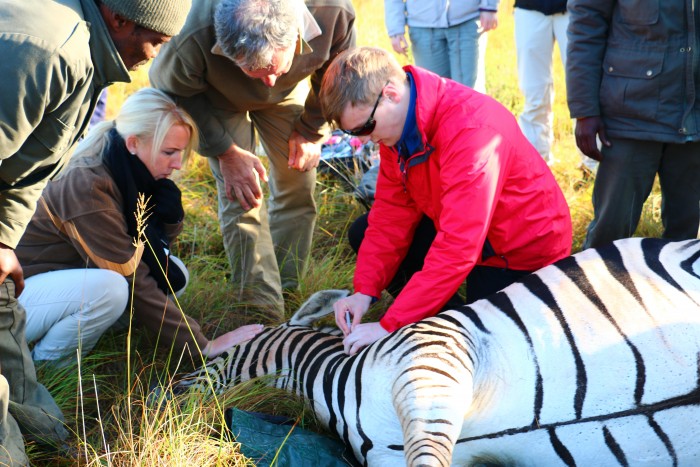 11th June
Having had various discussions about poaching and prevention over the last few days, we tried our hands with a rifle and shotgun this morning, whilst considering the purpose of such weapons on a game reserve (eg within anti-poaching units). After Sophie and Hannah proved to be the best shots, we then used telemetry equipment to track one of the leopards on the reserve. Although unsuccessful, we enjoyed the drive, spotting other wildlife along the way.

Having been passively trapped, a male and female buffalo needed parasite treatment. Darting proved harder than expected, and stealth tactics had to be adopted to coax them out of their hiding spot. Once sedated, we had to work fast. The bull’s horn length was measured and age assessed. Lucy then administered pour-on ivermectin for parasites.

Doug pregnancy diagnosed the female while I gave her pour-on. Erin and Megan gave her vitamin injections before Kaitlyn and Sophie timed their antidote injections on each buffalo so they would wake up at the same time. As soon as the reversal was given, we all ran back to the vehicle so we could make a swift get away. Working with the buffalo seemed much more pressured than other species because of the danger of them charging either before the sedation kicked in or after it had been reversed. Hearts racing, everyone seemed able to keep cool and carry out their tasks, even with the potential danger. 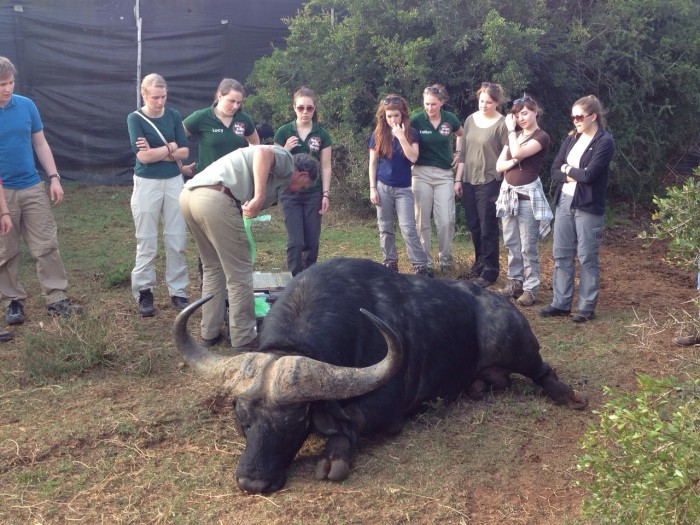 12th June
Shamwari is closely linked with the local community, and so we got involved this morning at one of the schools in the nearby town, Patterson. After arriving to some very excited children, who soon had to go inside to continue their lessons, we got to work painting their climbing frame and swings in bright colours and patterns. The end result looked much more fun than the original, unpainted wood. We hope the children will prefer its new look.

In the afternoon we continued our search for the leopard on the reserve. This time, our tracking was more successful, and, using the telemetry equipment, we managed to narrow down a discrete area which she was occupying. Despite managing to localise her whereabouts, we still didn’t manage to catch a glimpse of her.

Our efforts were rewarded, however, when we spotted a rhino and her three-month-old calf at close quarters on the drive back to camp.

15th June
We put our shooting skills to the test again, this time with the dart gun. The vet discussed adapting to different scenarios such as strong winds, expecting the animal to jump at the sound of the dart and different pressure settings. Most of us seemed to have improved our aim since the rifle range!

We then witnessed it in action, when a wildebeest that needed to be moved off the reserve reacted violently to the shot and ran around for some time. However, expecting this, the vet’s aim was right on target, and the first darting attempt was successful. When the wildebeest finally went down, Heather ear tagged him, ready for his new home, and Doug had an injection to top up his sedation. After a joint effort to get him onto the stretcher and load him into the truck for transport, I climbed in and gave the injection to reverse the anaesthetic to wake him up.

Our day had started with a brief discussion of various things involved in game capture and touched on the topic of rhino poaching. This was followed up by an afternoon talk given by the head of the reserve’s Anti Poaching Unit. Although we’d extensively considered poaching throughout our time at Shamwari already, his presentation really touched a nerve for many of us, and has reinforced the tragedy that will inevitably result in extinction far quicker than we could have guessed. Moved by the reality and scale of the problem, we have all been inspired to raise awareness so others at home can try to understand what has become a very harsh realisation. 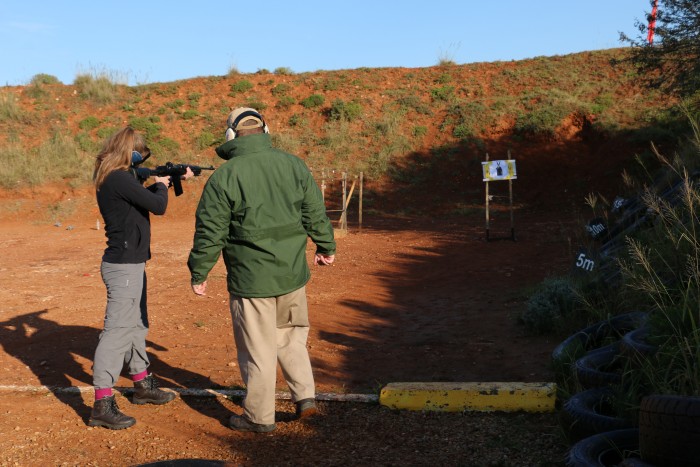