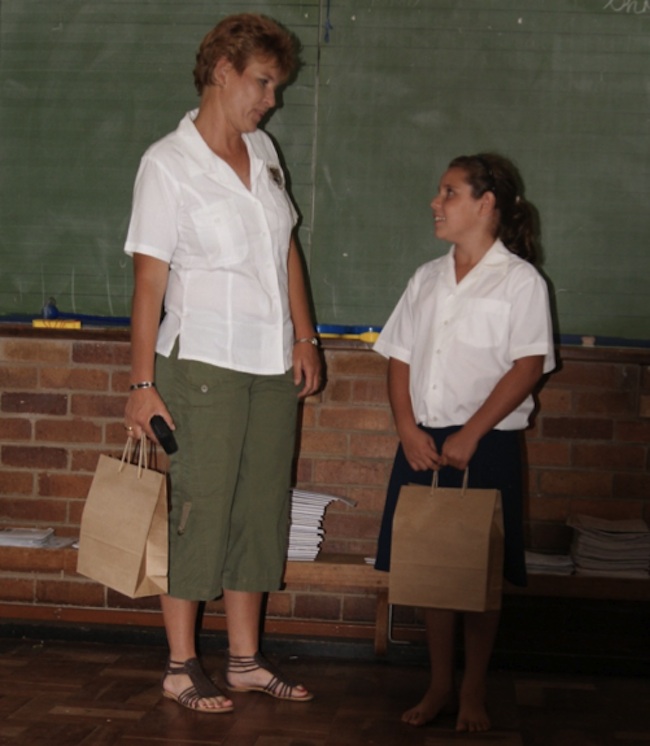 We met a very special little girl while dropping off donations at Mariepskop Primary School. Rachel is in Grade 3 and she was very happy to share her experiences of the recent floods with us. On the morning of the 18th Rachel left for school as normal, but by 8am it was already raining so heavily that the children were all sent home again. Driving home with her father was slow going, as water was literally gushing over the road. When their car got stuck, they were left with no option but to make their way through the stream to get home.

Rachel recalled being very worried about her mother and dogs, as they were alone at the house. Rachel and her dad made it home eventually, and she was relieved to see that her mother and dogs were fine. Unfortunately the water levels rose so quickly that soon only the roof of their house was sticking out. There was no time for them to even try and save anything, so the family lost almost everything they owned. Rachel mentioned things like their important papers and her father’s computer which had all his work on it, but what concerned her the most was that her books and stationery were all gone. As soon as the water levels began dropping again, the community jumped in to help. Rachel told us that people were so wet and cold that their lips turned blue. To make matters even worse for this poor family, their car then fell into a donga. What we found so remarkable was how brave and strong this little girl remained in spite of the ordeal she’d been through. Rachel firmly believed that everything would soon be all right again. And for now it is…they have another place to stay for a while, and thanks to all the sponsors we were able to give Rachel brand new books and stationery.