This was by far my most eventful week at HESC. To start
it off, an elephant back safari to watch the sun rise. Another amazing
experience I hope to never forget. It was relaxing just sitting on an elephant
looking out over the African lands. This is something I would recommend to
anyone travelling through Africa.

Then, I helped move cheetahs into different enclosures.
This consisted of getting cheetahs into a metal crate carrying them in the truck,
driving to their new enclosure and re-releasing them. Some are harder than
others to catch and others are quite heavy. As we were moving one of the
cheetah the driver was told to stop near the fence of an enclosure to which I
could see 2 cheetahs, one of the workers went in and picked up a tail of a
cheetah and let it drop. It was then that I realized there was 3 cheetahs in
the cage – one was paralyzed. This was when everything becomes a little blurry
– everything happened so fast. First we stopped at the nearest enclosure to
drop off the one cheetah we had been moving, drove back to the other enclosure
and started running with the crate to get the injured cheetah. The last thing I
can remember hearing while running in through the gate was the one worker
yelling at me to keep an eye out on the other 2 cheetahs to make sure they do
not get to close to me. We ran through the field got the cheetah and were off
running again. Later on I found out that one of the other 2 cheetahs was
stalking me the whole time until the worker yelled at her. I guess I didn’t
keep my eyes on them the whole time… It was off to the vet clinic again after
this. We were there for approximately 7 hours during this time the female
cheetah past on and another post mortem was done to figure out the cause of
death. 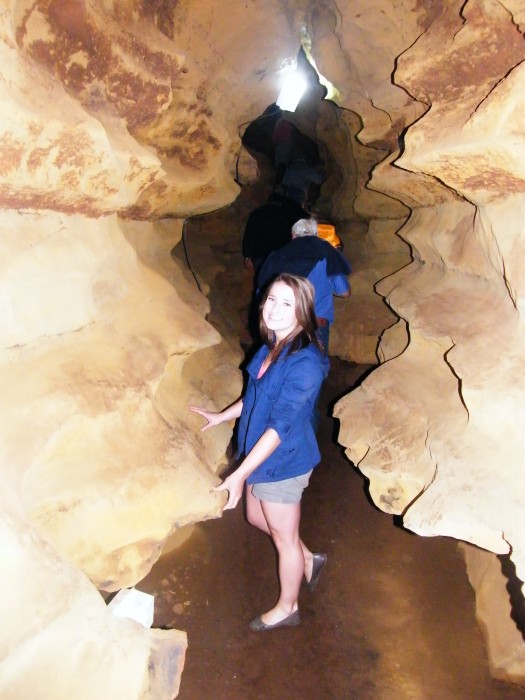 On my day off I decided to go horseback riding which was
really cool. It was like horseback riding anywhere else except your
surroundings consisted of wildlife like zebras and giraffes. In the afternoon
the student programme workers took me on a picnic to a near-by waterfall and to
see the Blyde River dam, this was a very nice day – Beautiful scenery!

My last excursion day followed this and it was my favourite
day of the whole 3 weeks. It consisted of caves, potholes, pancakes and flee
markets. The caves were really cool and the tour guide did a very good job at
explaining the history behind the caves and all of the general information that
dealt with them. The potholes are huge rivets cut through rock from century’s
flow of water. They were extremely interesting.
Part of what made this day my favourite was on the route getting to all
of these different locations. We had to travel a far distance and the scenery
was spectacular – Full of towns, canyons and much much more. During the drive
we stopped at a bunch of flee markets and tourist look-outs. The flee markets
were full of cheap and cool stuff, I bought a ton of necklaces! As for the
pancakes…let’s just say it’s one of the best pancakes I’ve ever eaten. It was
delicious and there was so many choices to choose from.

Throughout the 3 weeks I was supposed to go to the
butchery 9 times but because of the lion and cheetah incident I only had to 4
times. Being the only volunteer did have it`s advantages. Even though it is
South Africa`s winter right now the weather was amazing (for me) and it only
rained one of 24 days I was in Hoedspruit. I would recommend this programme to
everyone and anyone! It is truly amazing how close you come to some of the
biggest and wildest animals in Africa, maybe even the whole world. I already
miss it every day.