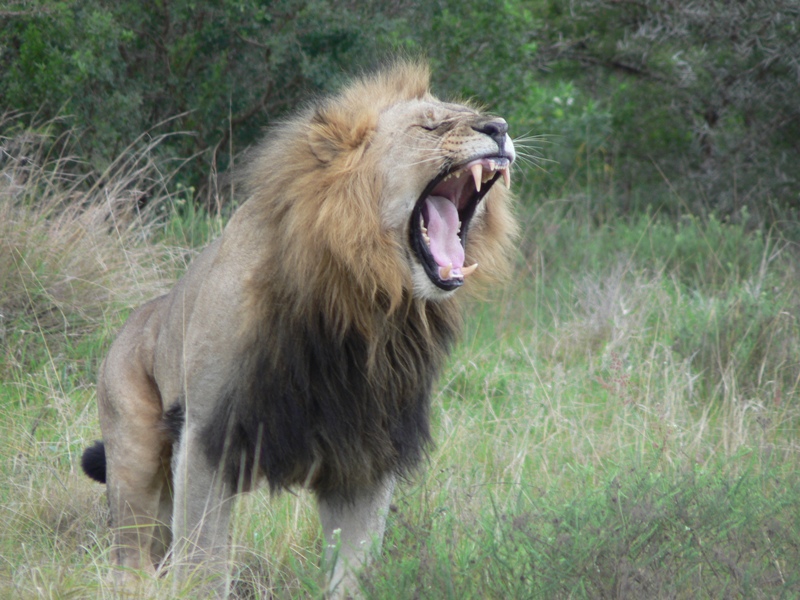 Elephant Impact StudyFor 2-3 weeks, the elephant herd was found close to the Bushmans River where they wandered back and forth on an open plain bordering by a thicket mountainous area.  There is plenty of water in this area and during our observations we witnessed many mud baths and play time in the water.  It is also nice and warm and sheltered from the wind on these plains, as it is surrounded by mountains.

Volunteers still busied themselves this month with trying to identify new individuals but the challenges with this project remains.
There is one particular experience with the elephants that stand out this month.  Whilst the roads on the reserve were still wet from the previous week’s rain, our vehicle got stuck during our elephant observation time one morning.  At one point our vehicle was surrounded by elephants but all we could do was to stay put and remain calm.  The herd passed us so closely, that certain individuals sniffed at volunteers on the back of the game viewer vehicle.  After two hours we received assistance from Kariega rangers – by then the elephants started to move off in a different direction.  All our volunteers remarked that this was an incredible experience never to be forgotten.

Lion Prey Study – The predominant prey of lions on Kariega, has been Blesbuck in the past.   The Blesbuck numbers on Kariega West have decreased drastically because they are relatively easy prey for the lions.  Therefore, reserve management decided to introduce more Impala and Kudu instead.  According to the data that the Kariega volunteers obtained in April, it is clear that the lions now prey more on Impala. Warthogs are also still a favourite and we are aware of one Kudu that was caught this month.
The Kariega Volunteers were very fortunate to see one of the sub adults stalking an Impala.  Although it did not succeed in catching the antelope, it was good practice session for the sub adult.

Rhino Spatial Movement StudyOne Friday morning, the volunteers attended a talk about anti-poaching.  Thank you to Frank, head of anti-poaching at Kariega Game Reserve, for your very informative talk about the current poaching situation in South Africa and the rest of Africa.  Frank emphasized that it is critical to create awareness and to educate the public regarding poaching.  In the mean time we have to try and keep our precious rhinos safe and fight the war on the ground.
We had several wonderful sightings of rhinos in April, which include the black and white rhinos.

Leopard ProjectThere were six movement sensor camera traps out during April in different positions. On average we kept a camera for three weeks in one spot, depending on how much activity was detected.  We received several pictures of baboons, bushpig, bushbuck, elephant and black backed jackals.   We received new rechargeable batteries from the Kariega Foundation for this project and it has been a great aid to us.  We can now leave a camera for up to 2 weeks before having to change batteries (depending of course how many photos were taken).

Vegetation ManagementThe volunteers excelled in April and chopped out 89 Black Wattles, 101 Red-eyed wattles and 103 Pine trees. 39 massive Pine trees were also ring barked. Hundreds of small seedlings were removed, especially during the rainy days when one could get rid of them with root and all.

The volunteers did some bush control, especially along the roads where the Searsia sp are very dense.  Last year on Kariega East a controlled fire was used to get rid of moribund grass and also to help with bush encroachment.  These bushes are now slowly starting to grow again, and before it gets out of hand, we quickly poisoned it while still controllable.  On the other hand we planted 489 Pork bush (‘spekboom’) cuttings all over the reserve.  With all the lovely rain we had, I am sure it will grow really well.  “The best time to plant a tree is twenty five years ago.  The second best time is now” – Proverb.

Community workIn April the Kariega Conservation volunteers attended the Klipfontein after-school centre in conjunction with the Kariega Project and the Kariega Foundation.  This time they prepared leadership games for the children.  There were three groups and the children rotated between the groups and played different games with each group.  It is heartwarming to see how our presence there is so appreciated by the children.  It was a day for all smiles – not just the kids, but for the volunteers as well.  This is definitely one of the weekly highlights (and of cause the pizza night afterwards in town!).
With all the school holidays and the rain this month, we only visited Farmerfield School once.  Hopefully our school attendance will be better next month.  We supplied them with a big box of learning and teaching material.  These were donated by kind Kariega guests from all over the world and then of cause the supplies that the Kariega Conservation Volunteers bring with them.  This is much appreciated by the kids and teachers who only have very little resources to work with.

Other ActivitiesOne early Thursday the volunteers packed their backpacks ready for an adventurous hike in the mountains. We started off in the drizzle, then the wind started blowing and the sun came out and we saw a lovely rainbow over the reserve.  We had four seasons in one day repeating itself.   The volunteers hiked all along the top fence line to check for any holes or whether any repairs were needed. No serious damage or problems were found with the fence.  The Kariega volunteers went camping at the old Adventure Centre on the most perfect night of perfect nights!  The magical African night sky had us all in awe again.  We enjoyed a traditional South African braai, starting with self made stick bread.   Then the camp fire stories started…  Priceless!

The volunteers did three game counts this month, one on Harvestvale, Kariega East and Kariega West.  There are various techniques to use when doing a game count.  On Kariega Game Reserve, we use the Road Strip count method, but we adapted it a bit to suit our conditions.  Usually you count all the animals in a pre-determined mean visibility strip from the road, but because the vegetation is so dense on Kariega Game Reserve, we count all the animals we see.  The reason for this is because some animals are overlooked within the strip because they happen to be standing behind a tree or a bush.

As you now know we had wonderful rains. One day the weather conditions were really not ideal for outside activities, so we improvised a bit.  The volunteers attended a snake bite talk presented by a medical doctor.  The talk was mostly about what clinical symptoms you could expect with the different snakes species, as their venom differ from each other. The doctor also showed us first aid techniques you could apply and what treatment a doctor would give after the different snake bites.  A really interesting and helpful exercise! The Kariega volunteers where fortunate to be present with the release of impala on to the reserve.  Our responsibility was to count the impala to check if the numbers are correct and that there were no impala injured during transit.  It all happened really fast and fortunately there were no problems.