Pumba Private Game Reserve has been home to a flourishing pride of free roaming White and Split Lion since 2006. There are less than 500 White Lion left in the world, making the reserve, an important custodian in ensuring this species well being. It is extremely
important for the survival and sustainability of a pride of lions that they are not all white but mixed with the tawny split gened animals, as the white animals are too conspicuous because of their colour and on their own are not successful hunters.

The long-term objective of Pumba Private Game Reserves Breeding Programme was to restore the natural balance by reintroducing an integrated pride of White and Tawny Lion into the Main Section of the reserve; this was successfully accomplished in December 2011. It has been an exciting journey for the reserve, and the success of the project was achieved after the introduction of a White Lioness (Nomathemba), in October 2009. The emphasis behind Nomathemba’s introduction was to enrich the gene pool amongst the existing pride. Before the reintroduction into the Main Section of the reserve, Nomathemba gave birth to her first litter of cubs, which were discovered on the 01st April 2011. 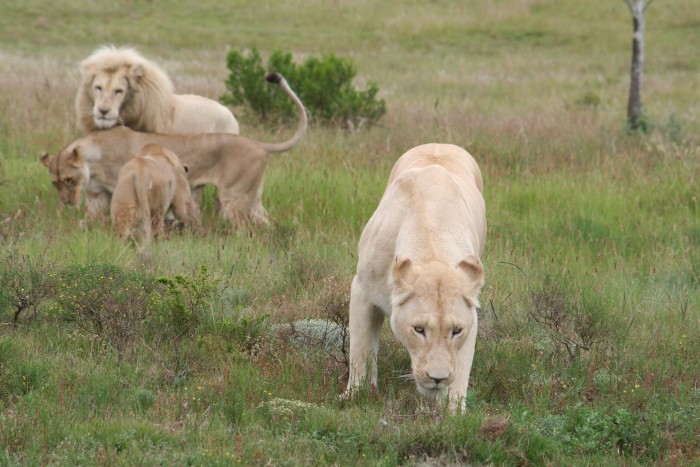 The White and Tawny Lion prides have established themselves well, in the reserve, and have provided some exceptional sightings for visiting guests. The White Lioness and her cub enjoy the northern section of the reserve, ranging from the floodplains and foothills of the North West to the open plains infront of Pumba Water Lodge. Ntombi the Tawny
Lioness dominates the southern section of the reserve, ranging from the thickets and open plains of the South West to the floodplains behind Pumba Water Lodge. Numerous encounters between the two prides have been seen, though without any conflict. The reserve is alive with an abundance of prey species to choose from, with, to date, Blesbuck, Kudu, Warthog, Wildebeest and Red Haartebeest, having been killed by the lion. On two occasions the White Lioness and her cub, were watched, hunting and successfully killing Warthog infront of Msenge Bush Lodge, while guests had been enjoying lunch on the open decks.

With both prides having established their individual territories, it was noted in January 2012, the White Lion, mating with Ntombi and Nomathemba. If mating has been successful, the reserve could see the birth of an additional two litters of cubs in the middle of April, this year.

It is Pumba Private Game Reserve’s legacy and aim to fulfill our commitment as custodians to our countries biodiversity and the reserve, to monitor and manage this small metapopulation with sensitivity and responsibility, into the future. Read more about wildlife conservation.